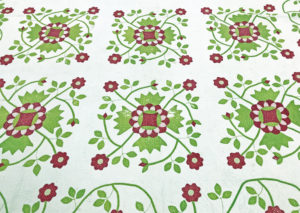 Our current exhibit, Red and Green Quilts, on loan from the Rocky Mountain Quilt Museum (Golden, Colorado), features several quilts with rose motifs.  Floral themes, especially roses, were common in both appliquéd and pieced quilts in the nineteenth century.  One particular pattern featuring roses was a bone of contention between the Whig and Democratic political parties.  The Whig Rose Variation, also known as the Democratic Rose pattern, which became popular in the mid-nineteenth century, was claimed by each party as their official quilt pattern.  Odd, political parties fighting over a quilt pattern?  Maybe not, considering the time frame.  During the nineteenth century, women’s voices were heavily restricted by societal norms.  Quilting provided women with a means of expression – it gave them a voice.  Therefore, some used quilting to express patriotism, religious beliefs, and more controversial issues such as the temperance movement. 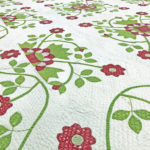 Isabella Campbell’s version of the Whig Rose Variation (currently on display) may or may not have been created to support a political party.  That detail is not known.  What is definite is that she was a quality quilter.  Isabella’s quilt is hand appliquéd and pieced of solid and geometric prints in red, green, and off-white, with an appliquéd border.  The appliqué is attached with blind stitches.  Made in Illinois in 1850, this beauty could have been hand-crafted as a political show of support or Isabella may just have been fond of the pattern.  Either way, we are fortunate to have this magnificent specimen available for our viewing pleasure.